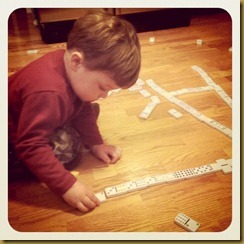 (Photo of my toddler using the Instgram app…isn’t is cool?!?)

One of our favorite family game night games is Dominoes.  We have the Mexican Train domino version. The rules are for the players to start with seven dominoes in their hand with a double-number domino placed in the center.  Then each person places their matching number domino and you take turns matching up your dominoes which form a train. If you can’t match, then you draw one and put up a plastic train on your line so others can play.

But playing games with a preschooler and toddler doesn’t usually involve rule-following.  Our two year old adores the plastic miniature trains so he is usually focused on playing with those while our four year old likes to count the dots on the dominoes.

It’s important to try to teach the basic concepts but we also allow for a lot of ‘interpretation’ of those rules as well…which often leads to other really fun versions of game play!

What “Moving” activities do you have planned for the week?
(Feel free to comment below)